The AutoDapp project aims to automatically convert any existing web or mobile application into a decentralized application (DApp) by changing just a single line of code, starting with Discourse and MediaWiki. This blog post outlines a high-level approach to instantly decentralize popular applications by interposing on the SQL connection between its web server and database. With the unified effort of the open source community, we can accelerate the advent of the decentralized future for millions of users – this is what we’re calling our “One Million” mission. 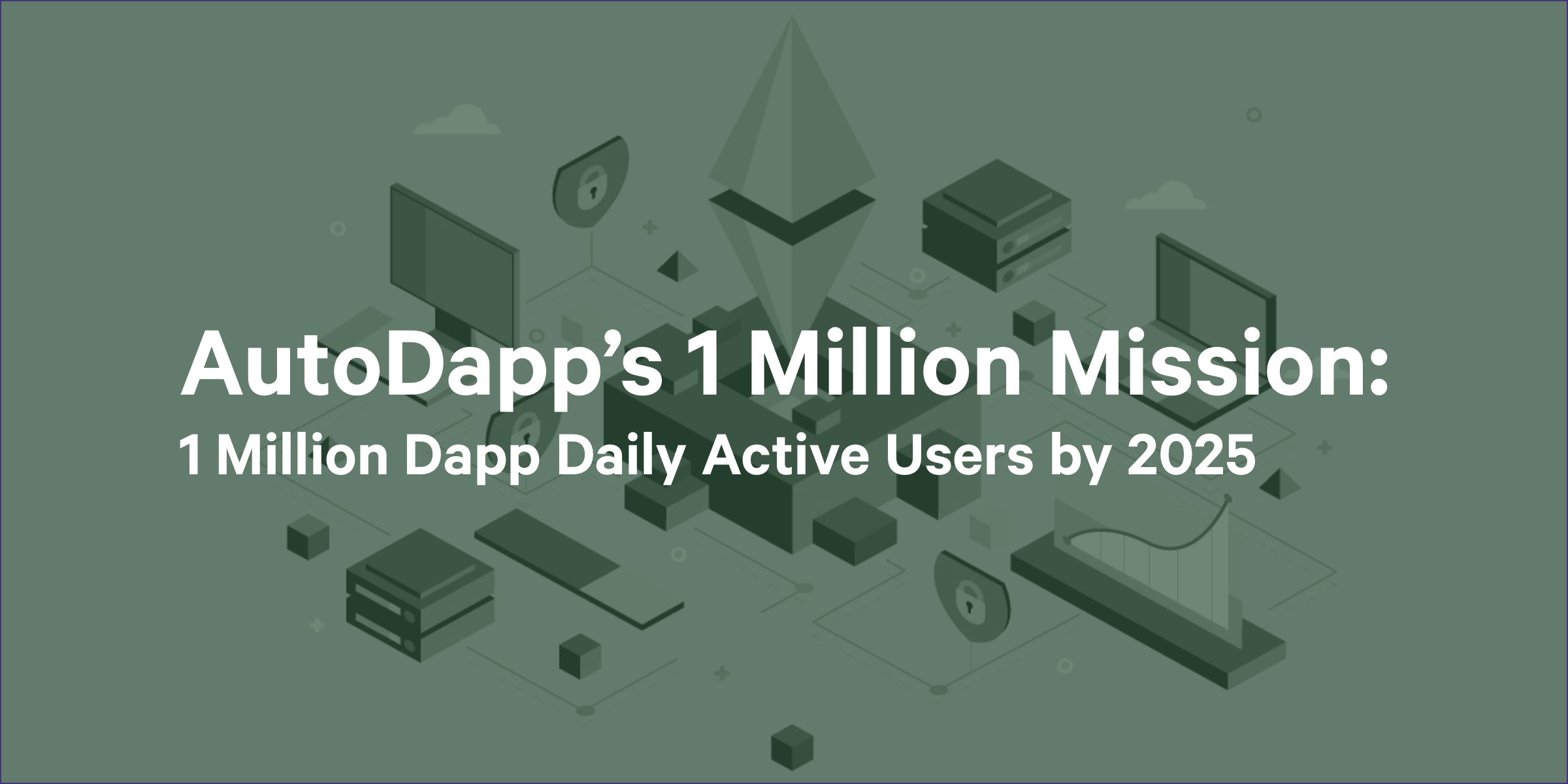 Why aren’t there more Dapp users?

Efforts towards decentralizing the Web have now been a decades-long journey. Companies and smart people join the cause for various reasons, whether ideological, to shift the balance of power, to make their applications resilient to censorship, to protect free speech, or to encourage greater innovation.

Traditionally, the movement has been defined by technology-first efforts. First, design a decentralized or peer-to-peer subsystem (such as storage, SQL database, document-oriented database, graph database, content delivery, or application logic), and find ways to plug it into an existing application’s tech stack. If you have assembled enough subsystems to write full applications on top, you might try to package it as a platform (1, 2, 3, 4). While efforts to decentralize applications existed well before cryptocurrency, even with the recent excitement behind crypto projects such as Ethereum still has not generated mass adoption of decentralization technologies. To date, decentralized application usage still pales in comparison to centralized equivalents. Across the entire blockchain ecosystem at the time of writing, we see less than 100k daily active users.

Why is adoption so low? There are a number of factors, which may not apply equally to all decentralization efforts:

The goal of the AutoDapp effort is to push the boundaries of taking a low-friction developer-first approach. Can we allow developers to use the existing, mature web stacks that they are used to, enabling them to switch between a centralized cloud deployment and a decentralized deployment with only a single line of code change? If we can do that, we can instantly decentralize many existing popular applications.

For the purposes of this blog, we will narrowly define blockchains as a Byzantine-fault tolerant consensus protocol. At its core, all a blockchain does is help all nodes/miners/validators replicate data and achieve agreement on the global ordering of all items on a log or ledger. This can be either a permissionless or permissioned blockchain. While compatible with governance and incentivisation schemes, we will save those topics for a later post. 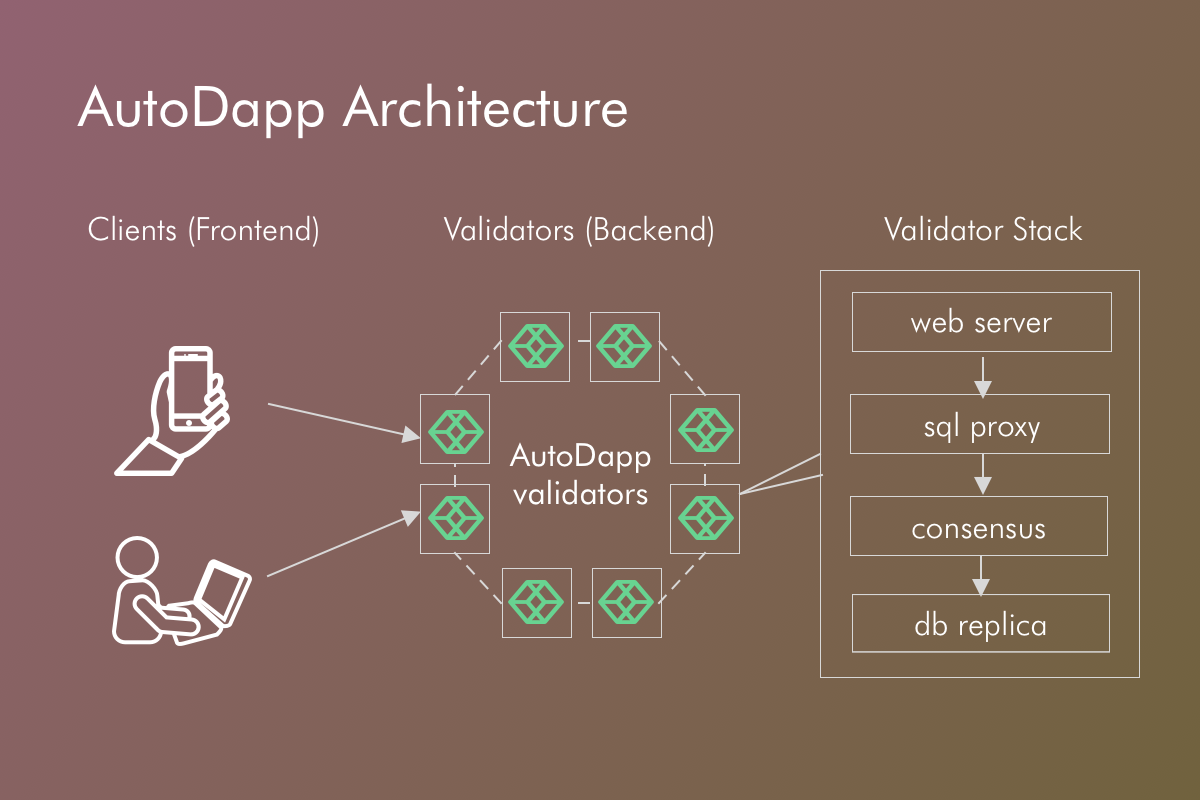 Our AutoDapp architecture is designed to enable any web application, even with proprietary code, to run in a decentralized setting with the change of one line of configuration: its database connection string.

For example, all a developer has to do to decentralize their app is change the hostname of their database connection of their web server from:

Instead of pointing your web application to a centralized database, such as a managed MySQL instance on AWS, the application points to an AutoDapp validator. That’s all it takes to make your application decentralized!

AutoDapp validators are blockchain validators that also run a copy of the entire backend web stack – the web server and a local database replica. All application state is replicated over a network of AutoDapp validators. A front end client application (e.g. web or mobile) simply needs to be configured to connect to a validator that they trust. If the client doesn’t trust any existing validators, they can also run their own validator. For convenience, we can also use DNS routing to automatically connect users to a validator, requiring no changes to an average user’s user experience. 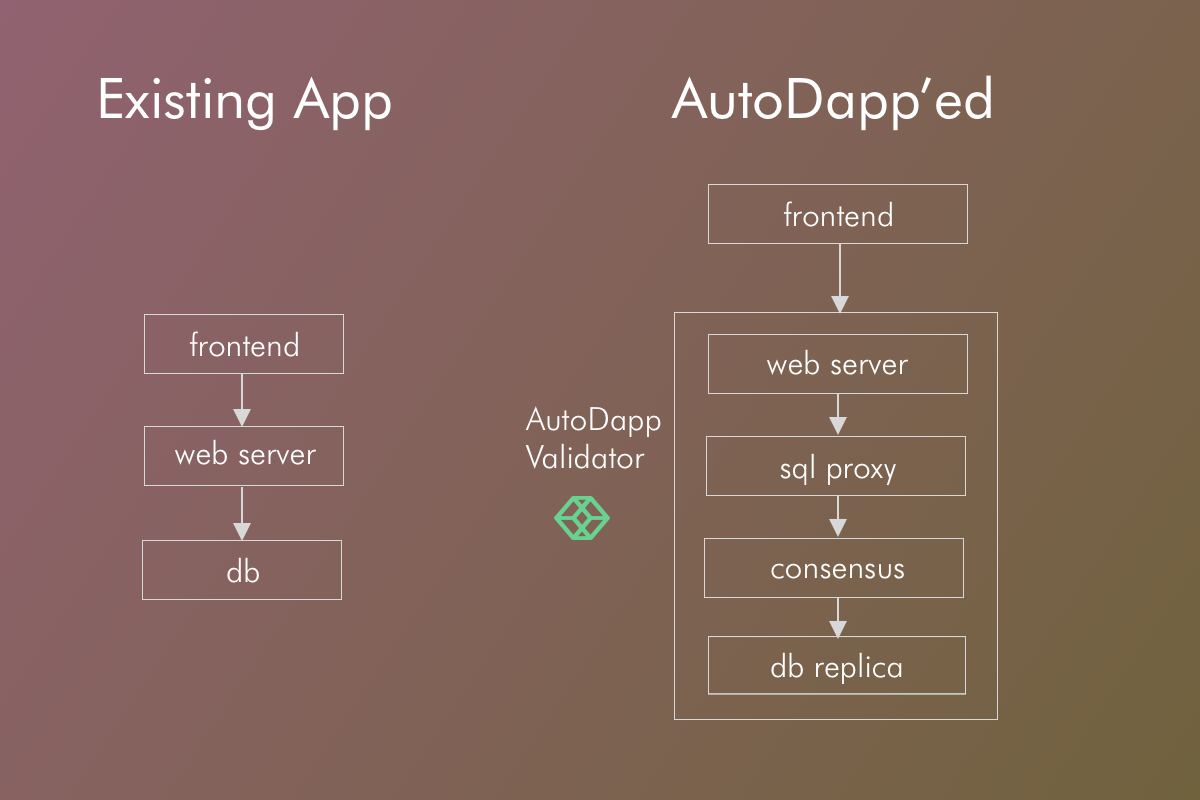 Within each validator, the web server is reconfigured to connect through an AutoDapp SQL proxy. Upon intercepting a SQL command from the application, the AutoDapp proxy will determine if it is a read-write command (will mutate state in the database e.g. CREATE, INSERT, UPDATE, DELETE) or a read-only command (will not mutate state). Read-only commands like SQL selects are forwarded directly to its local database replica, and query results are immediately returned.

Read-write commands are broadcast to all validators on the network. Every validator checks if it contains valid SQL commands, appends the operation to the next block, and runs a consensus protocol across all validators to agree on the state of the blockchain log. Once committed to the log, each validator executes the agreed upon SQL commands to its local database replica. The application waits until the log and SQL transactions are finalized. As with any journaled file store, new validators replay the log of all SQL commands to construct its replica. 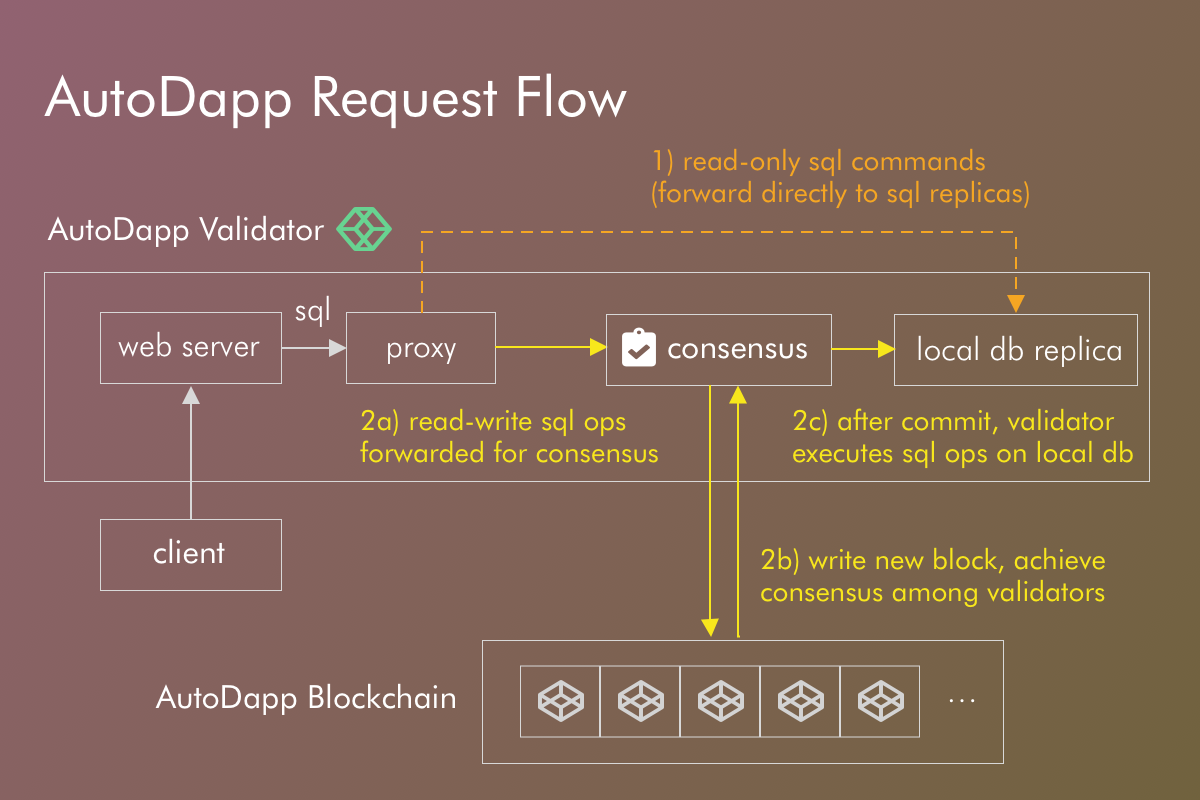 This architecture ensures that all clients, regardless of which validator they are connected to, see a consistent view of the database and all writes are globally ordered by the consensus protocol. This simple architecture works because most web applications are already designed to be stateless at the web server and client. All we would need to do is make sure that the database is consistently replicated across all validators.

Why is this good for the decentralization community?

First of all, we can just test en-masse a whole universe of decentralized applications. Instead of dedicating venture money and whole teams to build a copy of XYZ app (but decentralized), we can just AutoDapp the existing application and try it out immediately. We can instantly test product/market fit for our XYZ Dapp. No usage? No skin off my back. Who knows, one of them might stick.

Some applications benefit from decentralization, but not all do. By easily being able to switch between a decentralized deployment and cloud deployment, developers can easily test whether decentralization actually addresses any real risks, such as censorship or malicious threat models.

How is this different from federation?

Federation requires the application developer standardize a server-to-server protocol for sharing data between servers. This requires substantial coordination and developer effort, and often ends up poorly implemented. AutoDapp can be used to automate the data replication between servers, similarly allowing anyone to spin up a new server instance for an application. Imagine if the Gmail application were replicated across Google and Microsoft, vs Gmail and Outlook communicating over a shared email protocol (SMTP).

How is this different from using a blockchain database?

Some projects, such as CovenantSQL and BigchainDB, try to lower friction for new Dapp developers by exposing well known APIs (e.g. SQL and MongoDB respectively) over a database replicated on top of a blockchain. While AutoDapp shares many similar technical components to these projects, the focus will be different. Instead of offering a publicly accessible SQL interface to a shared service running on a particular blockchain, we plan to focus our efforts on porting and optimizing existing applications to run end-to-end. This approach may yield different design decisions when it comes to authentication, data privacy, deployment, and performance scaling.

We are currently in the early stages of working on AutoDapp’ed versions of Discourse and MediaWiki. We hope these tools can be useful for existing decentralized companies, many of which are still relying on centralized cloud services for their internal operations (dogfood much?). One promising application for AutoDapp is censorship-resistant content. Any centralized application that facilitates public discourse or provides invaluable information to the public is at risk of attacks from outside malicious actors or censorship from its central authority. Enabling the AutoDapp-ization of these applications can help safeguard against these scenarios.

We are only in the early stages of this journey, and expect many open challenges, including but not limited to:

We need your help!

Do you think this is cool? Do you want to AutoDapp-ify the Web with us? Join us! We want to keep this an open source community effort. Here’s how to start:

Developers! If you want to help contribute to the cause, reach out to us via GitHub or email!

This is just the beginning, look out for more blog posts on progress and updates soon.

Acknowledgements: Huge thank you to Armani Ferrante, Nick Hynes, Will Scott, Reuven Gonzales, and Christopher Heymann for their helpful feedback and comments.

To follow the conversation on Hacker News, check it out here