Choosing how to add localization to your application can be a complicated decision, because there are so many options out there. From code-based frameworks to third-party services that automatically rewrite your HTML, there is no silver bullet for localization. At Plasmic, we have been exploring the many options to better inform how we can support localization for our own application. Many tutorials assume you want to already want to use a code framework, like react-i18next, but that has implications for your team’s workflow. In this blog post we will survey different localization techniques you may be considering for your React application and discuss some of the trade-offs.

There are a number of considerations as you look to deploy your application to a global audience. First and foremost, translating the text on your app is critical to support the many non-English speaking users around the world, opening up new markets. Furthermore, displaying prices, dates, times, keyboard shortcuts, and graphics can greatly improve the user experience.

Comparing approaches to localization in React

When choosing an approach, there are a number of factors that you may want to consider:

The natural choice for a React code base is to reach for a i18n library, such as react-i18next, react-intl, or lingui. There also framework-specific libraries, such as gatsby-plugin-i18n for Gatsby, and next-intl for Next.js. At a high-level, the architecture for most of these operate similarly, so I’ll use react-i18next code samples to illustrate the main concepts.

Code: How it works

At the core of your localization workflow are translation files. These can be served as static files, or imported directly into code. While each library has different specifications for this file, at a high level translation files simply consist of strings used in the application, keyed by some unique identifier.

For example in react-i18next, you might serve 1 file at public/locales/en/translation.json for English:

and another file at public/locales/de/translation.json for German:

Developers then initialize the library with your configuration. In the following example, we choose to load the translation files over HTTP and leverage a language detector that automatically sets the locale based on the Accept-Language HTTP header.

In the codebase, developers can use a translation function to look up strings for the user’s locale.

Many libraries also include a React component that you can directly use in the JSX tree:

For developer convenience, most libraries also include tools to perform static analysis of the source code to extract translation keys/values into translation files.

While this can automate the aggregation of translation keys, developers will still need to populate translation files for each language they want to support.

Some translation platforms provide more seamless integration into code, removing the need to manually send translation files. For example, Locize can be loaded as a “backend” plugin into i18next so that translation files are fetched directly from their CDN. This way, users can directly modify strings, source translations, and publish results all from a single web application.

Implementing internationalization in code (i.e. via a library) has a number of benefits

CMS: How it works

Headless CMS systems, like Contentful or Sanity, require a developer to integrate their system into an existing codebase. However once set up, non-developers can make new content or edit existing content entirely from the CMS web application.

For example, in Contentful, you can manage which languages and locales your application supports.

After you specify which languages your site supports, the content editor allows you to add translations to your content. 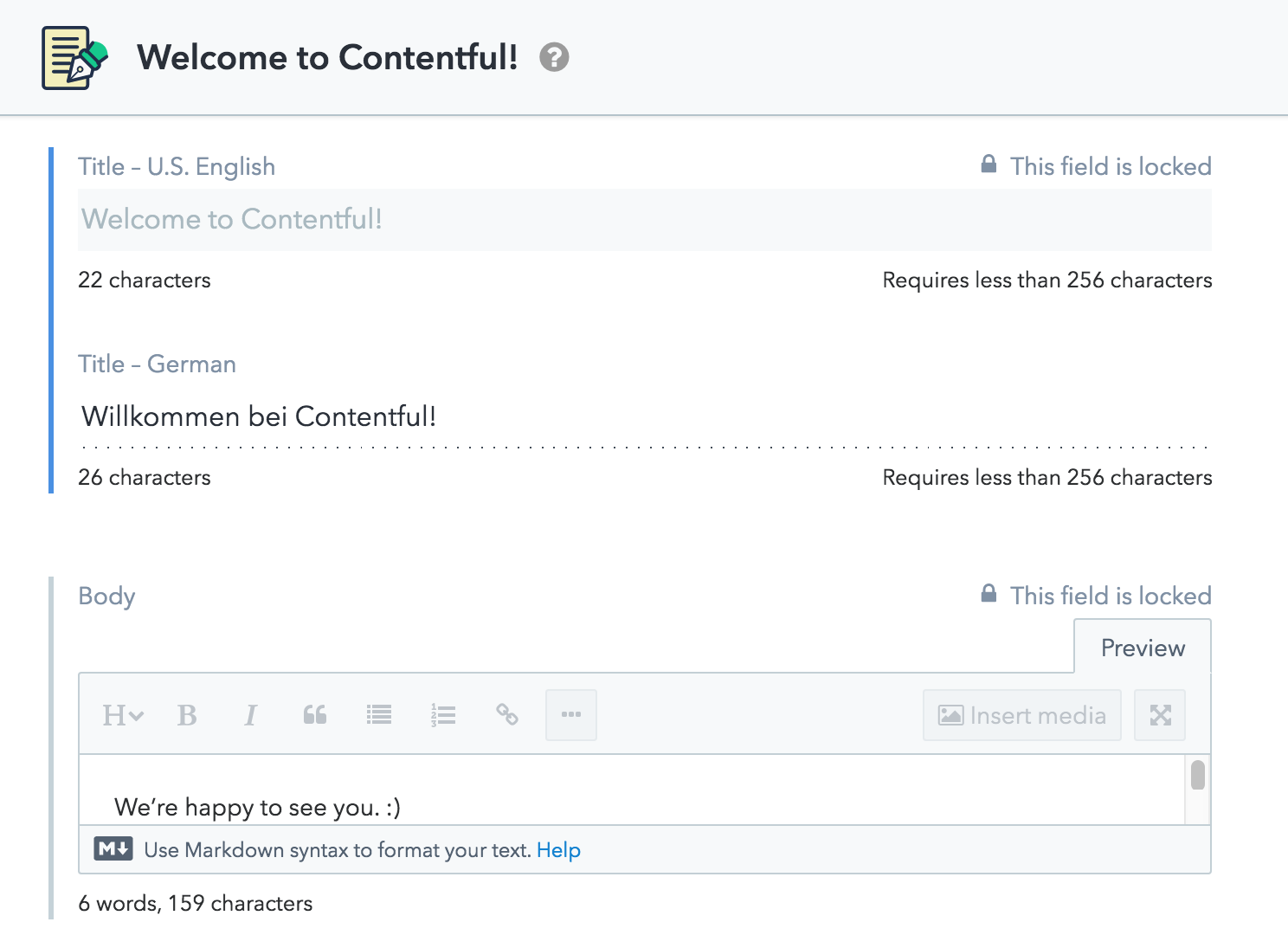 Developers then retrieve localized content via the REST API, by specifying a localeparameter:

Structured CMS data can then be used to populate the page. For example in Gatsby it might look like this (source):

How are CMS and code-based approaches different?

However they differ predominantly in the developer interface, leading to drastically different code architectures. For code-based approaches, developers operate at the granularity of strings. Every string needs to be wrapped with a call to a i18n lookup function to find the proper translation.

In contrast, CMS systems allow you to define content types that embody a group of data, such as a blog post or product entry. When you retrieve data from a CMS, you get the result as a translated object, which you can use directly. While these APIs are different today, I anticipate future libraries to take from the best of both worlds.

There are a number of services that take it another step further, automating the collection of all strings from a live website in production, as well as dynamically rewriting the page with translations, such as Weglot, Localize, and Gtranslate.

Automated: How it works

These automated services typically include a library that users can add to their website. For example, the Weglot integration involves adding the following script to your document <head>(Source).

On page load, this script will detect all of the visible strings in your web pages and load them into a dashboard. The service will facilitate translations (either by machine or humans), which can all be managed from the web app. Once strings have been translated, future loads of the web page will also detect the user’s locale and automatically rewrite strings in the DOM to reflect the translations.

Some services provide a server-side option. Instead of rewriting strings via client-side scripts, you configure your DNS to point to a translation proxy. This proxy server will similarly detect strings, rewrite the page, and cache content, which may lead to better website performance. 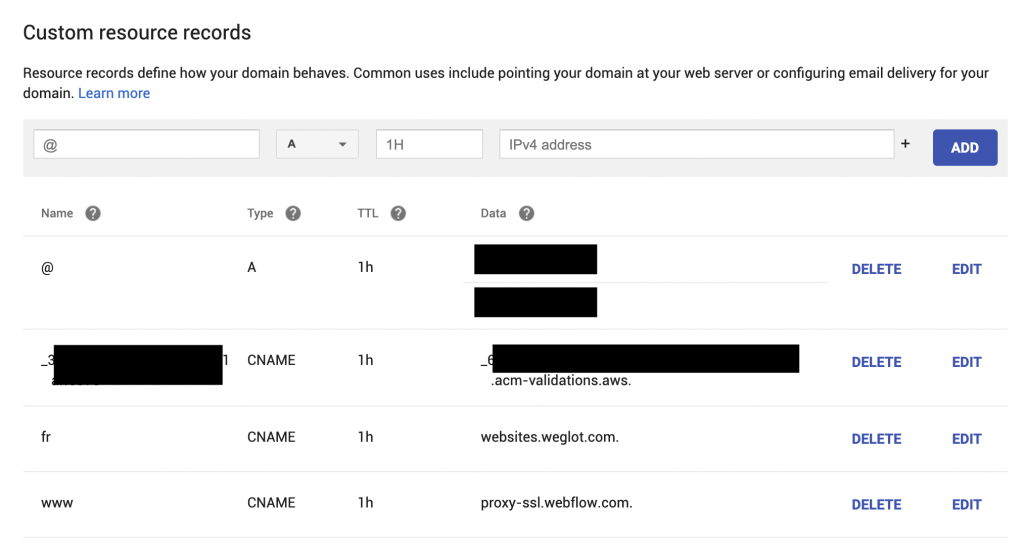 Note: Many of these services can also be used from a developer API without the integration script. In this case, you can treat the service similarly to a CMS like above.

Plasmic is a visual builder for the web, which makes it easy for content editors and designers to build and iterate on pages in a WYSIWYG editor, rendered within your existing website. Similar to other headless CMS systems, Plasmic enables you to support multiple locales for each webpage by creating new variants. This way, non-developers can visually design and edit the entire webpage in a collaborative environment.

However, Plasmic’s support for localization goes much deeper. We can also import your translation function from your code-based localization framework directly into Plasmic as a prop.

Once registered, you can leverage these localized strings from your Plasmic project! Plasmic opens up the ability to leverage the best of both worlds from code-based approaches to headless CMS’s. For more details, see our Plasmic localization guide.

No single solution will be best approach in all use cases. Often times, the decision relates to where you want a developer to sit in the workflow, if at all. Automated solutions provide the simplest user experience, but may not work well for all use cases. Code frameworks and headless CMS solutions provide more customizability, but require developers to at least perform the setup. Regardless of which approach you choose, localization is one of the best ways to quickly open up new markets to your application.